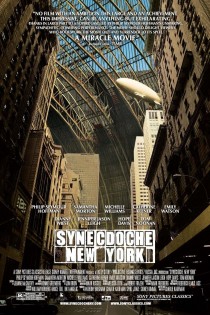 Following the incredibly sad loss of Philip Seymour Hoffman, I present this review of this amazing film so that you may go and watch it, and wonder again at the superior talents of this relatively young man who has left us far too soon.

Synecdoche, New York is the big screen directorial debut of wonder-screenwriter Charlie Kaufman. Kaufman is lauded for penning majestic scripts Being John Malkovich (1999), Adaptation. (2002), Confessions of a Dangerous Mind (2002), Eternal Sunshine of the Spotless Mind (2004), as well as the film we are presently discussing.

Synecdoche, New York is an ambitious, complex piece of literature which works as a film because of the exceptional qualities of the key individuals involved. It is a wonderful analysis of life and death which you will almost certainly have to watch twice or thrice to command a firm grip on the many human truths embedded within the script.

I cannot overemphasize what a fascinating film this is, or how brilliant Hoffman is as the lead character, Caden Cotard. With the devastating news of Hoffman’s passing, I am finding it hard to separate the loss of the actor with the neuroses of Caden Cotard. Currently, in my mind, actor and character are somehow inextricably intertwined.

As always, we recommend you don’t ruin any surprises by reading spoilers or watching trailers.