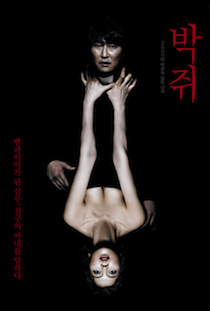 Park is well-known for “The Vengeance Trilogy”, i.e. the brilliant Sympathy for Mr. Vengeance (2002), the wonderful Oldboy (2003) and the average Sympathy for Lady Vengeance (2005). J.S.A.: Joint Security Area (2000) is also meant to be very good but we can’t offer our opinion on that one yet.

A Bittersweet Life (2005) and I Saw the Devil (2010) are also very popular among crime thriller fans although we found the former a bit too John Woo and the latter a bit too contrived. Both are definitely worth a watch, though; they’re good – just not excellent.

So, on to Park Chan-wook’s highly entertaining Thirst…

You can find more information on this Korean-language movie on Wikipedia and IMDb.

Like we always recommend: don’t ruin surprises by reading spoilers or watching trailers. This one gives away all the film’s main themes and story lines: