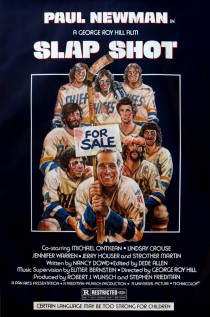 Paul Newman is hilarious as Reg Dunlop, player-coach of the Charlestown Chiefs hockey team. It is a joy to watch an actor of Newman’s calibre getting his hands dirty in a flick which is, essentially, a slapstick (excuse the pun!) comedy mixed with a dash of kitchen-sink realism.

The story, the characters, the action, the humour, the drama, the acting: it is all fantastic. Helmed by George Roy Hill, who once again directs Newman (Butch Cassidy and the Sundance Kid, The Sting), Slap Shot is heaps of fun!

As always, we recommend you don’t ruin any surprises by reading spoilers or watching trailers. This trailer is pretty harmless and gives you the flavour of the film. However, it does not really capture what a brilliant film this is – so do not be put off if you watch it!