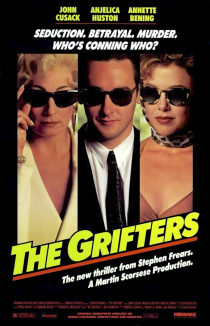 An unacknowleged classic, The Grifters is a neo-noir of the highest order. For my tastes, it is the best noir I have seen, with Double Indemnity (1944) a close second.

The film is based on the novel, The Grifters, by legendary pulp crime fiction novelist Jim Thompson.

John Cusack, Anjelica Huston and Annette Bening take you on a journey you will never forget. The casting here is absolutely superb. Highly-respected supporting actors such as Pat Hingle, J.T. Walsh and Charles Napier flesh out the terrific screenplay even further.

Stephen Frears had just finished directing the wonderful Dangerous Liaisons (1988) when Martin Scorsese approached him and told him he was producing a new movie and wanted Frears to direct. The rest should be the stuff of legend. Hopefully, one day, The Grifters will be listed as a classic. It deserves it.

You can find more information on this American movie on Wikipedia and IMDb.

As always, we recommend you don’t ruin any surprises by reading spoilers or watching trailers. The following trailer, as usual, gives away too much.

Based on: The Grifters; the 1963 novel by Jim Thompson